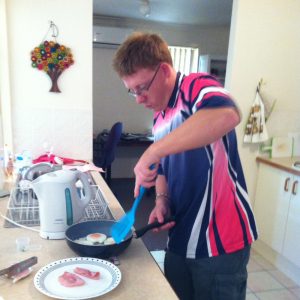 David is a young man of 31, living in Boondall and sustained by family and support workers to have an interesting and challenging life. He has two older sisters and Mum and Dad. Bespoke Lifestyles supports the family to manage his funding and provides ongoing advice and education around family-managed arrangements.

When David left school about 13 years ago, our idea of his future was limited to “special” day programs. David has Autism and very little speech so had little input into the decisions about his future at that time.

In 2005 David discovered Facilitated Communication which enabled him, for the first time, to articulate what he wanted to do with his life. Using FC, he could convey his deepest feelings about self-worth and participating in society.  He could then tell us that he found the day programs frustrating as his individual needs could never be met in a big group setting. He didn’t want to spend his time on a bus going to the movies or doing “activities” with a group of people not of his choosing to fill in the day.

We attended conferences and workshops with organisations such as Pave the Way which showed us a future for David we never thought possible. Hearing words like ‘family governance’ and the possibility of David living in his own home was a revelation. We learnt how to have a plan and a vision for David for his future. We applied for funding to support David in this new plan and have been successful in securing some ongoing funding for this purpose.

We started with Bespoke Lifestyles in October 2010 and David is now well supported by six wonderful support workers who all contribute something unique to his life. We have hired these workers ourselves and David is part of this process. The support workers and family have regular meetings to troubleshoot issues and to seek out more interesting pursuits for David.

Each week day has a plan, which of course is subject to weather and other variables as is anyone’s. David enjoys gardening, both at home and at a community garden, attends local gym and a hydrotherapy pool for fun and fitness. He is building up his mowing business on Tuesdays and Fridays. He rides his bike around local bike tracks and enjoys backyard cricket, ten pin bowling and golf. He attends two writers’ groups on a monthly basis which extends his self-expression and monthly he hosts a group of friends at his house for coffee and conversation. David is currently working on a leadership project with the Brotherhood of the Wordless to advocate to service providers what non-verbal people need to achieve a satisfying and productive life. Each facet of his life brings a different mixture of challenges and friendships to be built on in his local area.

There is a rich mixture of work, exercise and creativity in his life – something we all aspire to. He isn’t doing anything just to fill in his days idly, in fact he craves being busy and useful. David has voted in the last few elections and is proud of his status of being a “fully-fledged member of society” – his words. 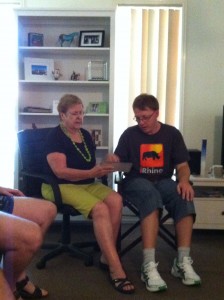 David is now living in his own home with his house-mate, Dan. This arrangement has been working for just over a year and has enriched David’s life immeasurably. Dan works in Redcliffe and is home in the evenings for dinner and genuine company. They do great things some weekends, like long bike rides, bare foot bowls at a local club and just hanging out. They enjoy $6 steaks at our local footy club on Monday nights with David’s sister Lisa. Dan’s presence has made David feel like a regular guy, and we as a family are confident David is safe and enjoying his life. He recently had a State of Origin night at his home, with both sisters, two little nephews, in fact ten of us all sharing the fun and food in his own home.

“David’s journey to this point has had two large cross roads – one the discovery of FC and the other being able to plan his life and make his own choices with his individual funding.”